If Patty Was a Costume, Why Can't They Recreate It? 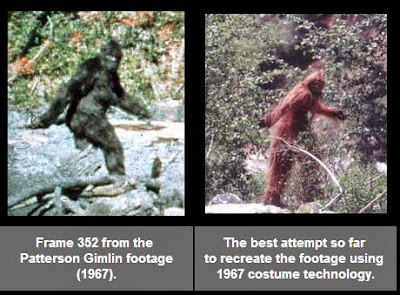 When Roger Patterson and Bob Gimlin filmed the Bigfoot walking across the sandbar back 1967, little did they know that their film would be scrutinized by skeptics trying to debunk it. To this day, no one has been able to duplicate the creature they caught on film. The BFRO gives us an example of one colossal failed attempt by a TV network to recreate the "costume":

Q: Why can't it be done? Why can't anyone accurately recreate the "costume" used in the Patterson footage?

The image on the right is from a scene in an episode of X-Creatures. X-Creatures was a wildlife documentary series made by the BBC's (British Broadcasting Corporation) Natural History Unit. The episode was filmed around 1995 or later.

In this program the BBC sought to debunk the Patterson footage by recreating the "hoax."

In order to have the most exacting re-enactment possible, the BBC hired the best monster costume designer in Hollywood and even took the costume to the same location where the Patterson incident occurred in Northern California.

How could the BBC have missed the mark so badly with their replica of the Patterson "costume"?

In the Patterson footage, the figure's muscles are flexing noticeably as the figure walks away. To simulate that, the BBC's costume designers in Hollywood had to create a costume that would show the same effect of flexing muscles.

Remote controlled soft-tissue prosthetics were not invented until well after 1967, so they could not be used in an honest replica of a 1967 costume. The costume had to allow the actor's own muscles to flex the outermost surface of the costume.