Showing posts from January, 2010
Show all

By Shawn - January 10, 2010
Move the cursor to 9:20 minutes and you will see a dark figure that moves up, and then back down the hills. An in dept and somewhat lengthy analysis can be found at http://www.bfro.net/news/great_north_figure.asp

I think it's a photographer attempting to get still shots during the filming.
1 comment
Read more

Science is an attitude?

The guy swear he's some sort of scientist, lecturing us what science really means. These guys were really hunting for Santa and according to them, archeologists have already discovered an 800 year old sleigh in the Nafud Desert, Saudi Arabia.

By Shawn - January 07, 2010
Captured footage in 2006 near Sequoia National Forest in eastern California as part of hiking/photo expedition with Eric Baxter and Aaron Wise.

When will these people learn to keep the﻿ friggin' camera still?

If a war correspondent can, then surely bigfoot hunters should be able to. 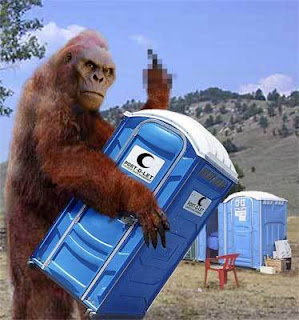 Information
The $1,000,000.00 Hunt for Bigfoot will be held in the San Juan Region of Colorado on July 10-14, 2010 with Hunt Headquarters located at Bigfoot Central in Silverton, CO. approximately 50 miles North of Durango, CO. on Hwy. #550.  Many sightings of Bigfoot have been reported in this area over the past 200 hundred years, with recent credible reports of sightings and personal encounters during 2009. Registered participants will be given (96) hours to locate and photograph a live Bigfoot within the Designated Hunt Area of a 100 mile radius of Silverton, CO.  The first photograph presented to the Promoter and authenticated by it's designated specialists, will win the $1,000,000.00 reward. Additional prizes will be awarded for photographs of Bigfoot Physical Evidence, i.e. tracks, shelters and the like as well as for Best Photographs of selected animals in the wild. 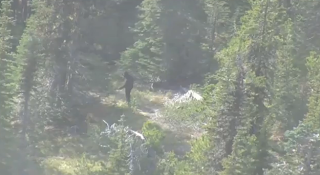 I was in that area a few days ago.  The wilderness and thick brushes in the area is perfect habitat for animals such as these.
Video shows some people messing around with boulders, and spotted a creature running off into the distance behind the trees. Seems they scare the living daylights out of him.

Film is a little shaky at first, but picture came out sharp towards the end of the clip. Enough for us to get a good shot of the creature.

Cloudy with a chance of Sasquatch

The National Weather Service seems to have discovered bigfoot, and posted a photo of it!

By Shawn - January 06, 2010
News story of a man hunting north of Pittsburgh said his camera captured images of baby bigfoot.

Looks like an escaped chimpanzee to me.  The local zoo there did not immediately return our call.

"Our plan was to tranquilize one of these animals, then take blood, hair, skin, and tooth samples"

By Shawn - January 06, 2010
Clip was previewed at Sylvanic.com. It's part of a mini documentary named "Origins of Sylvanic", an attempt to promote species awareness in order to protect these "human-like primates".

Look closely at the video.  I think it's a bear, a shy one at that.

By Shawn - January 06, 2010
Difficult to make out what that blurry thing was.  Another case of SCS: Shaky-Camera Syndrome.

By Shawn - January 06, 2010
Maine Tree Creature! This is a video taken by some friends hiking through the woods in upstate Maine.


Bigfoot or Bear? Vote below.


Update 1:  webtech88, the original poster deleted the video off Youtube.  Very suspicious.
Update 2: webtech88, re-posted his now famous video.  In a personal message to me, he mentioned a "surprise" on the way!
4 comments
Read more