Pictures of The "Clawed" Costume During Production 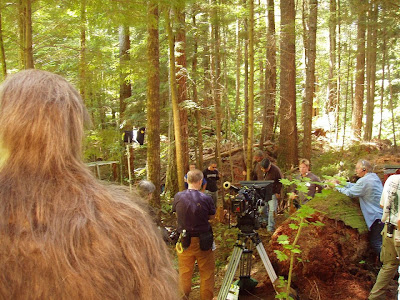 Back in 2012, shortly after Bigfoot researcher Melissa Hovey posted her "Bigfoot" photograph online, Coalition for Reason, Science, Sanity in Bigfoot Research team member Dave Conover contacted costume designer John Healy of Healy FX to get his take on the photograph. After a quick look at the photograph, Healy admitted that Hovey's creature did not resemble his suits. "Three costumes were fabricated... All were dressed with roughly the same fur, and none resembled your attached photo," Healy wrote. Though he doubt it was one of his suits used in Hovey's photograph, he think it's possible the costume was modified to look a little different. "In my opinion, if this was a copy of our Clawed sasquatch. The fur may have been pulled off and replaced with a longer, multi toned synthetic that appears to be on a lace mesh," he explained.

Healy shared these images with Conover, who posted it on Facebook:


We recently contacted Karl Kozak via email and we have confirmed he is rightful owner of the Hovey photograph. After losing a court battle with Phil Poling, Hovey has been forced to remove her copyright claim on the photograph. Here's what Kozak wrote regarding his Claw photograph:

The photo that Melissa Hovey is circulating was taken during a filming break on my film "CLAWED: The Legend of Sasquatch". We shot the feature in the woods of North Bend, Washington. The actor was about 6'4" and wearing this silicon suit we had created by a SPX company that is no longer in business. I have many other photos of the suit and the actor "behind the scenes". I threw out the suit several years ago as it was aging and not pleasant smelling.

We recently wrote to Miss Hovey and asked her to remove the copyright from that photo, as it is our photo. We got an email saying "Melissa is out of town and we'll get back to you" response from her assistant (supposedly). We never heard back from her.

All those wanting to see the film can catch it on Netflix. I have to at least make a plug for the film, right.