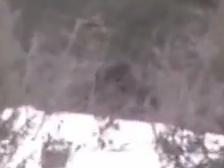 A video was uploaded to YouTube last week purportedly showing a "Bigfoot" walking into the trees across a canyon. At first glance they thought it was a person, but after looking at it for a while, the uploader, Lukeking327 said "it looked more and more not human".

Earlier this morning, an anonymous poster left a comment claiming to be the person who filmed the video:

I am the person who filmed this video, I was searching the video on google to see what came up and found this. I am not a Bigfoot researcher or anything, I don't even have an opinion on Bigfoot. To respond to some comments and hopefully answer some questions, we initially saw the figure from a different angle where it was a little easier to see. The way it walked and how easily it traversed through the deep snow seemed somewhat unorthodox. I got my camera (which I was using for other things, not searching for Bigfoot) out of my jacket and filmed until it went out of sight, thinking this could possibly be a Bigfoot. How did I zoom in on it? Most video cameras have view finders, and I use this camera quite often and I know how to point and shoot, its simply not that difficult when you're in a fairly open area. Also, its a 4 or 5 year old camera, sorry I didn't have an expensive hd quality camera. And, we did go up there to look for tracks. It was extremely steep down the canyon and up the other side, not to mention the 2 feet of snow covering the ground. We did find tracks. Not being a Bigfoot researcher I didn't think to video the tracks. But I am a hunter and know any track out there, and this seemed legit. If it was somebody up there performing a hoax, they went to new extremes to try and fool somebody else. It took us about an hour to get to where we saw it, and we're in shape people and it had us huffing and puffing. I don't know what it was, but it seems very unlikely to have been a human. And it definitely was not a bear. I hunt bears, know what to look for in a bear, and it's arms were way too long in proportion to its body to be a bear