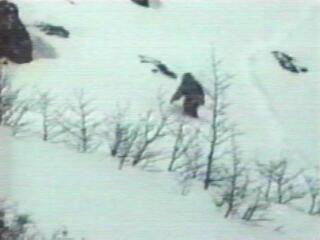 The Snow Walker video footage was thought to be the most compelling evidence of Bigfoot since the Patterson Film. Researchers vouched for it and the Bigfoot research community was mesmerized. The footage was released in 1996 by Paramount's UPN TV show, Paranormal Borderland. The purported Yeti was filmed by a couple while hiking in the Himalayas in 1992. As it turned out, none of it was true.

The film fooled three prominent Bigfoot researchers including Dr. Jeff Meldrum, Dmitri Bayanov, and Igor Bourstev. On March 12, 1996, Dr. Jeff Meldrum was quoted on UPN as saying: "We're talking about an individual somewhere between 8 to 10 feet tall in height..."

The footage was admitted to be a hoax after the cancellation of the show. Bigfoot enthusiasts were disappointed, probably none more so than the researchers that vouched for the videos authenticity.