Sierra Kills: This post from Taxidermy.net was where it all began [Bigfoot Shooting] 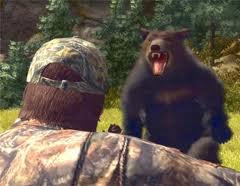 "If You Saw Bigfoot, Would You Shoot It?"

This was the title of the thread that was originally posted by Justin Smeja on Taxidermy.net before it was removed. The thread was unusual because the question wasn't posted on a Bigfoot forum. Instead, it was posted on a website forum about taxidermy, a method of reproducing a life-like three-dimensional representation of an animal for display.

When Smeja posted this question, he was not yet convinced he shot Bigfoot. According to Robert Lindsay, "Smeja did not believe in Bigfoot at the time of the shootings, and one month later, he still doesn’t really believe in Bigfoot. So his mind is making up all sorts of strange stories about bears in order to try to make sense of the incident."

It's difficult to know for sure what Smeja was thinking when he shot the creature in the back as it tried to get away. What we do know is that his story has been consistent from the very beginning. The location of the shooting had always been in Northern California. The "bear" always walked on two legs. Smeja has never mentioned a third person. It had always been him and his neighbor (the driver).

And then read this latest article by Robert Lindsay and you will notice that Smeja's original statement and the incident originally reported by Derek Randles are pretty much on par. Lindsay somehow managed to recover the original thread that had been deleted by an Admin.

We are now publishing as a world exclusive Justin Smeja’s original post from Taxidermy.net. We do not have the thread ourselves, but several other people do, and one of them has given us the pertinent information from the thread.

There is only one post in the entire huge thread that is very meaningful, and that is Smeja’s post below. The post was started by Smeja and was titled, If You Saw Bigfoot, Would You Shoot It? As you can see below, Smeja still thinks he shot the weirdest bear on the face of the Earth. Smeja did not believe in Bigfoot at the time of the shootings, and one month later, he still doesn’t really believe in Bigfoot. So his mind is making up all sorts of strange stories about bears in order to try to make sense of the incident.

Other than that, Smeja’s original post tacks well with the report of the incident on the Olympic Project’s website.

A couple of things are different.

Smeja says he shot it at 120 yards. Later reports change that to 80-90 yards. This is probably not an important difference.

The OP’s version has Smeja shooting the Bigfoot in the chest. As you can see below, Smeja stated that he shot it in the rear shoulder, presumably as it was running away. This is an important difference between the two versions.

At the very end, Smeja refers to the Bigfoot as “he,” but subsequent reports refer to it as a female. As Smeja says he never found the body, this may not be an important difference. As to why investigators have decided that the adult Bigfoot was female, I have no clue. Some suggested that the DNA findings indicated it was female.

One of the people Smeja spoke to early on, Mr. X, makes numerous posts in the thread. At two different times, this man says that there were two people on the hunting trip with Smeja, not one. Smeja makes no attempt to correct him. At the moment, we still do not know why Mr. X keeps saying that there were two other men present with Smeja on the trip. What do I believe? Do I believe there was one or two men present with Smeja on the trip? I do not know. Evidence seems to point towards only one, the driver, but maybe there were two. We just don’t know.

The following report required major editing for its computer format. In addition, it received an edit for punctuation, grammar and spelling. The edit did not affect the content of the message in any way.

Call BS if you want but this bear season I saw a bear in Northern California that walked on 2 legs and was pale white in color like a pale yote sorta. Like some grizzlys I’ve seen but whiter. It stood 8 feet tall or so and walked like a man. Could have been a grizzly (highly doubtful). I don’t know for sure what it was. Maybe just a monster black bear that got shot in the front leg years back and learned to walk different. I don’t know. I do know I was not alone when I saw it.

I shot it with a 25-06 behind the shoulder at 120 yards. It ran 70 yards into the brush and crashed. Sounded like a car wreck. I never found it. Not saying it was bigfoot at all – it just looked different from any bear I’d seen. If it looked any more human-like, I would have passed on it. Something wasn’t right there, oh and it was prob 600+ lbs or more. So to answer my question, I suppose the answer is probably yes for me, but not if he looked any more human then what I shot.

You can read more about this on Robert Lindsay's blog.

Update: Justin Smeja posted a response about a comment made by Autumnforest. We want to correct him on this since he's probably talking about a different "Autumn". The person he's probably referring to in the comment is Autumn Williams, author of  "Enoch - A Bigfoot Story." Autumn Williams operates a website a www.oregonbigfoot.com.

Update #2: Justin apologized for the confusion. "Oh... my bad. You can talk all the shit you want then autumn. You have no reason not to. Shawn you can delete that if you want to as to not offend the person I thought I was talking to. Apparently she's just been minding her own business."

Update #4: Results of the nuclear DNA testing for the Bigfoot Steak [Sierra Kills]