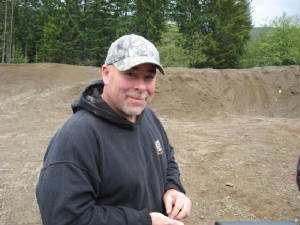 This photograph was first shown at a Bigfoot conference in Washington over the weekend where witnesses were blown away. While we're currently seeking permission to post the screengrab here, we'll provide the link to the image on Facebook for now. The image is just a snapshot of a 5 minute-long footage of a Bigfoot caught on thermal. Washington Bigfoot researcher Derek Randles explains the image:

This weekend we released an up to the minute research update with the Olympic Project. This we strongly believe is a thermal picture of a very large Sasquatch from the chest up at our current research site in Grays Harbor area in Washington State. It's between 4' and 5' wide at the shoulders. We also have a video that is being stabilized as we speak, and will be released as soon as its done. We believe in sharing evidence as it happens as opposed to sitting on it, so here ya go. The photo is copy written so please ask permission before it's used. Derek Randles. OP

[Update] Exclusive Interview With Jonathan Brown, The Person Who Filmed This Thermal Footage In Washington