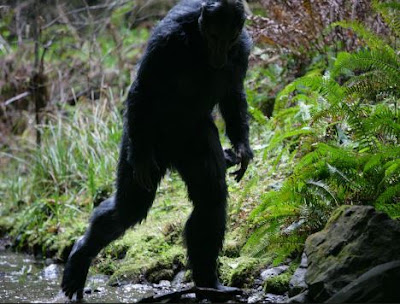 My question to you is 'have I seen something unusual?' In August of 2006, I was working in Northern California and was interested in finding Bigfoot prints. I have a friend who is a member of the Hoopa First Nation. I contacted him and then spoke to an elder. I was taken to an area where some footprints had just been found. Being skeptical, I took my right boot off and stepped down next to the foot print. I am 7' 1" tall and weigh 395 pounds and wear a size 17 street shoe or a size 19 boot (as boot sizes are often mislabelled). I am of Lakota Sioux lineage and speak a number of First Nation languages. After putting on my boots, we heard a screaming howl. My friends started saying Oh-mah was coming and we had to leave. My friend Dave told his elder about what I had done and we went back to the site three hours later. There were numerous large footprints surrounding mine and what I believe to be a large finger hole in the middle of my footprint.