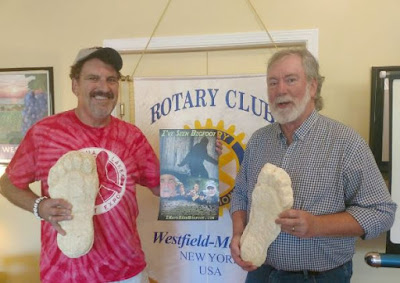 Peter Weimer presented his case for bigfoot in New York at the Westfield-Mayville Rotary Club.

“Many area individuals who say they have had eyewitness sightings of Bigfoot have contacted me. Some are afraid to have their identities known because they are fearful of being ridiculed. Others are concerned that if they report sightings of the creature to local authorities, the Bigfoot would become an endangered species,” he said at the meeting.

Weimer and Larry Battson, a friend, established the first annual Chautauqua Lake Bigfoot (CLBF) Expo in 2012. This event brought in national Bigfoot speakers from various parts of the country to offer their knowledge and experience with the creatures. Since then, Weimer reports that he has been informed of 41 people who claim eyewitness accounts from Chautauqua County, eight from Cattaraugus County, and more than a dozen from Warren County, Pennsylvania. Eyewitnesses’ ages and professions widely vary.

Along with Joseph Glarner and Mark Robinault, Weimer wrote, directed and produced a documentary movie titled “I’ve Seen Bigfoot.” In it is an exclusive interview with Bob Gimlin from the famous 1967 Patterson-Gimlin Bigfoot film and eyewitness account in Orleans, California. In 2013 Weimer flew Gimlin, who was 82 years old then, from Yakima, Washington to the Chautauqua Lake Bigfoot Expo. For online information about the film, see IHaveSeenBigfoot.com.