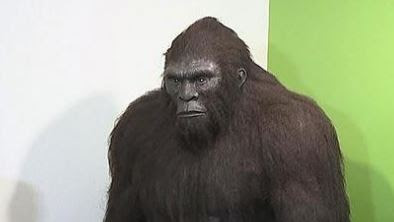 Cliff Barackman's bigfoot museum is off to a great start, and caught the attention of komonews.com recently. Check it out:

The North American Bigfoot Center launched a soft opening in the community of Boring at the beginning of August.

Leading Sasquatch researcher Cliff Barackman and his wife Melissa are the minds behind it. The couple met on the set of the "Animal Planet" show Cliff starred in, Finding Bigfoot. They've gathered evidence from around the continent -- from twisted branches and footprint casts to Native American masks and a suspicious Nutella jar. There's even a cast of a Bigfoot booty, if you've ever wondered what that looks like.