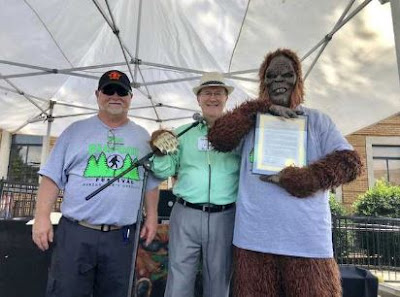 WHEREAS, Bigfoot, often referred to as Sasquatch, is described as an ape-human type bipedal creature that reportedly lives in the forests of the world, often being described as hairy with large eyes, a low set forehead and enormous footprints, with a height of 7 to 10 feet tall and weighing more than 500 pounds; and WHEREAS, reports have been taken over the years of Bigfoot sightings in 49 states, including North Carolina, with Bigfoot in the Western North Carolina region being named the Beast of the Blue Ridge; and WHEREAS, Bigfoot 911 was created in 2014 by John Bruner of Marion, North Carolina to pursue professional research in the field of cryptozoology, with the team conducting extensive research in McDowell County, North Carolina, documenting evidence that the team believes suggests that Bigfoot exists in McDowell County, North Carolina and examining the evidence presented and determining what evidence is genuine; and WHEREAS, the First Annual Western North Carolina Bigfoot Festival took place on September 8, 2018 in Marion, North Carolina and was an overwhelming success, attended by over 30,000 people, and featured an appearance by Bigfoot to accept a proclamation in its honor; and WHEREAS, Bigfoot 911 salutes Bigfoot again with the Second Annual Western North Carolina Bigfoot Festival in Marion, North Carolina and, with its thousands of followers on social media and hundreds of thousands of views of its social media posts, expects again to draw a large crowd of people interested in the subject to Marion, North Carolina; and WHEREAS, the City of Marion welcomes the opportunity to continue celebrating all things Bigfoot in Downtown Marion and for people to have a great time while exploring all that our City and County have to offer; and NOW THEREFORE, I,Stephen R. Little, Mayor of the City of Marion, North Carolina, having met Bigfoot in 2018 and wanting to continue the fun and to celebrate Bigfoot and its significant economic impact, do hereby proclaim Bigfoot to be the “Official Animal of the City of Marion on Saturday, September 14, 2019” and encourage all residents of the City, County, region and beyond to visit Downtown Marion that day, to participate in the Second Annual Western North Carolina Bigfoot Festival, to maybe even see a Bigfoot and most of all to have a great time. Proclaimed this the 28th day of August, 2019.