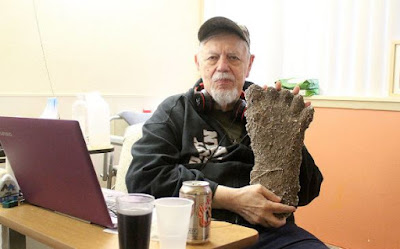 Bigfoot researcher Thom Cantrell holds up a Paul Freeman track cast, as one of the organizers of the upcoming third annual International Conference for Primal People in Washington state.

Washington state is famous for countless reasons. It’s the birthplace of Starbucks and Bill Gates, one of the biggest producers of the U.S.’s lumber and apple industries, and — arguably one of the most interesting facts — boasts the most Sasquatch sightings in the country, many believers claim.

In fact, Pierce County specifically is known to believers of the cryptid as one of the best areas to encounter one, so it should come as no surprise that the third International Conference for Primal People is being held nearby at both in Enumclaw and Greenwater.

The conference, slotted for April 26 – 28, is organized by Thom Cantrall, a “mainstay” of the Sasquatch community who has penned several books on the elusive being since his own encounter.