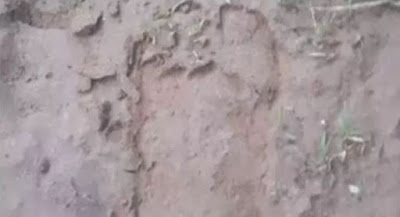 Officials in Argentina are on the lookout for a bigfoot creature. Reports sprang up, and large tracks are being found.

For the second time this month, a mysterious humanoid footprint has been found in Argentina and, once again, a Bigfoot-like creature is suspected of being the source. According to a local media report, this particular impression was found on a farm in the town of Ovando and astounded workers there by virtue of its considerable size. The print, they say, measured a whopping 10 to 12 inches long and around five inches wide. "The truth is that it is not a normal footprint," said the mystified owner of the farm.

The discovery of the marking was particularly concerning to residents of the area because it was found after a strange event in which the farm's normally-calm dogs began panicking in the middle of the night. The canines were "crying inconsolably," the farm owner recalled, and this was significantly different from how they normally behave when human intruders are on the property. In an attempt to put an end of the commotion, the man fired his gun in the air to scare whatever was bothering the dogs and that seemed to calm things down until the next day when the weird footprint was found.

Making matters all the more mysterious is that the incident occurred just a few weeks after authorities in a different Argentinian community spent eight days trying to track down an unknown creature that left behind a massive footprint. In that instance, the unknown animal in question was initially thought to have been a gorilla, but that theory was eventually thrown out by police, leaving some to wonder if perhaps the source of the print had been a Bigfoot. While that hypothesis was not specifically stated by the principal players involved in the case, it was seemingly broached by individuals looking at this new print found in Ovando.