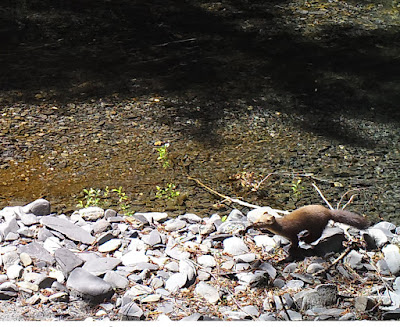 The Bluff Creek Project is a group of volunteers that spend a large amount of time and effort documenting the wildlife of the famous Bluff Creek area where the Patterson Gimlin film was captured. They have a network of cameras hidden throughout the area, that operate around the clock. While they haven't captured images of a sasquatch just yet, what they have accomplished is a library of fantastic images and video of the wildlife in the area. Including this little fella. The Humboldt Marten. A species so rare it was thought to be extinct until 1996. I'd consider this a major accomplishment for the Bluff Creek Project.
From bluffcreekproject.blogspot.com:


We are pleased to announce that we have captured an image of a cryptid Humboldt Marten Martes caurina humboldtensis. The animal was once thought to have been extinct up until 1996 when one was photographed.

Truth be told we have been catching glimpses of them for years. Our cameras are set about two feet off of the ground and the triggers are not set to fire on small animals. The only reason we captured this one is because the camera had malfunctioned. We had rushed in to Bluff Creek last October after filming the Lenny Green music video (Patty where are you now). I knew this might be out last shot to visit the film site since the gates were closing soon. I convinced Robert Leiterman and Steven Streufert to hike in with me in the dark to service the MK Davis site camera and the Plug camera, and also install two brand new units I has recently purchased.

Click here to check out the blog page where you can read all about the project and see some of the fantastic images and video the group has captured.