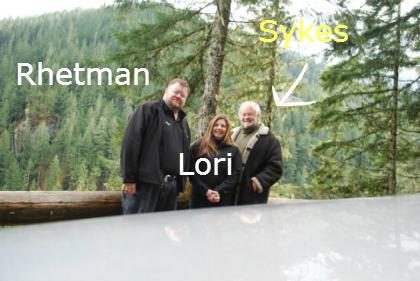 So, what exactly happened up in the north Cascades of Washington State in May 2013 that changed the way Dr. Bryan Sykes see the world? What possessed Sykes returned to the location a second time? Bigfootology's Rhettman Mullis says the famous professor of Human Genetics from the University of Oxford completely changed his views on Bigfoot and has gone from a skeptic to a complete believer. Now -- For the first time ever, we learned that Adam Davies and Bigfoot researcher Lori Simmons were granted permission from Dr. Sykes to detail his visits to America in 2013. They shared the whole story on the BoA:Audio show Tuesday.  Here are some details:

We then dig into the May 2013 secret expedition that was funded by Dr. Sykes and start by finding out how he actually received the first-ever research permit to study Bigfoot from the Oregon Department of Fish and Wildlife. Adam also talks about the forensic precautions that were taken by Sykes during the trip and we marvel at the fact that Dr. Sykes invested so much time and money in this specific Bigfoot case. Adam also shares one unique test used to try and lure the Bigfoot out into the open in order to capture a picture of the creature.

This leads to some talk about the various attempts to garner DNA evidence from the creature and Lori recalls how she felt conflicted over her role in this aspect of the expedition since she felt like she was betraying the 'Big Guy' after establishing a longstanding 'friendship' with the creature. We then learn what, if any, evidence was obtained from the expedition. Following that, we talk about how game cameras seemed to be futile in attempting to document the 'Big Guy' as well as Adam's reflections on how the American Bigfoot constitutes a wholly unique creature from the pantheon of cryptids that he's previously researched.


Listen to the show here: Listen on BoA:Audio