Would You Believe Me If I Told You Bigfoot Weaved This? 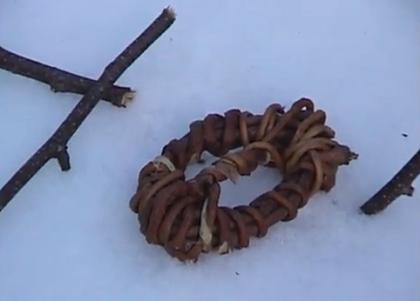 Do Bigfoots weave? According to YouTube user Sasquatch Ontario they do and if you thought Ketchum's Bigfoot horse braiding stories were weird,  here's actual proof that Bigfoot or "apes" can weave -- that's if you believe these people are the real deal: 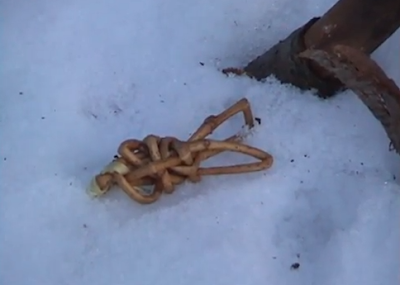 After six months investigations into an area of significant sasquatch activity, trust has built to a level enabling very close approaches. To date we've had two daytime visuals since investigations started in late september 2012. One with the owner and myself, the other with the owner's wife who managed to photograph the large male through the kitchen window at about 150ft on february 9th 2013.

Their incredible stealth allows them to consistently approach the cottage leaving prints and other sign of their presence.

We don't push matters trying to capture their image with trail cams or hidden cameras at this time. We've learned it's detrimental to gaining their trust. They seem to know all that we do. We've learned through audio that they are consistently aware of each and every position that 3 separate recorders are placed. Their awareness is extreme. They're now on us within minutes of arrival placing items and gifts while we're indoors.

Others who've gained the trust of the primal people know this situation to be fact and truth. Habituation with the primal people is real. There is no fast road to this. It takes patience and understanding. An incredible and thrilling adventure for any who can gain their trust. Treat them with respect and the rewards will far surpass any effort you put out. Treat them as though they're animals and you'll likely gain nothing. There's a reason they're still a myth.