The Erickson Project Is Now Called The Ketchum Project 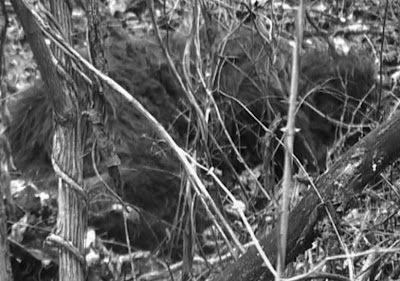 Somehow, we knew this day would come. Adrian Erickson has had it with Bigfoot and it now seems that Ketchum is holding the reins and now controls all of Erickson's Bigfoot footage. The collection of footage may contain a number of Todd Standing's videos as well as the famous Matilda footage. According to Robert Lindsay, Erickson and Ketchum apparently struck some kind of deal where Erickson's financial troubles are no more. Erickson is now happy and back guiding hunts again.

Robert Lindsay wrote this today about the Erickson Project:


Adrian Erickson sold out of the Bigfoot business? I haven’t been hearing much about Erickson’s financial troubles, extensively documented both here and eventually in the popular press, lately. Instead, the meager information coming out seems to be that he is not in deep and dire financial straights at the moment. Now how he got out of hot water, I don’t have the faintest idea, but I do have a guess.

My guess is that Erickson has simply sold out of the Bigfoot biz. It was worrying him sick anyway for the longest time, and now his mind seems quite clear and calm about the subject. At the same time, his financial deluges seem to have subsided. Put it all together, and I figure Erickson sold out of Bigfootery for a pricey sum.

And who paid him? Probably none other than Melba Ketchum. By way of whom? Probably by way of Wally Hersom. In other words, Ketchum got Wally to buy out Erickson in order to get her hands on Erickson’s video, which will add so much weight to her project.

Why did Erickson deny that his movie was being extensively edited in Hollywood earlier this year? Probably because it was not his movie anymore! It was Melba’s movie. Now whether he sold out altogether or just sold out rights, I am not sure.

But if Wally’s money is involved, the movie will not be buried and will see the light of day at some point. I also do not believe Melba would buy the movie just to bury it. She’s too committed to Bigfoot to do that. So the movie is in good hands. Even if it is with Melba, Melba will probably not release it before her study is done. Why not? Because one is hardly very good without the other, that’s why.

This also explains other things. Ketchum and Erickson have simply never gotten along, pretty much from Day One. That’s been documented extensively here for a long time. They were even threatening to sue each other back and forth for a long time, which often degenerated into questions of jurisdiction: “You can’t sue me. You’re in Canada and I’m in Texas…” and vice versa.

At any rate, all of this animosity is history now, and Ketchum and Erickson are getting along swimmingly for the first time, like old best friends from high school, and that makes no sense to me. However, if Erickson simply sold out to her, all basis for animosity is gone, and they can both be BFF’s.

As far as Erickson’s finances, I do not know, honestly. But I do know he is back guiding hunts again, which is what he loves to do. When he was underwater with financial woes, he didn’t have time to do anything but work and worry. Now a load is off his chest, and he’s back getting paid handsomely to have a hobby. He is also going hunting again in Africa soon. This implies he has a lot of time on his hands.

As in the past he was working nearly 6 days a week, 12 hours a day to keep his head above water, it would seem that with all this free time, his financial problems have lessened a lot. Anyway, it’s good news for Erickson any way you cut it.


Preview clip to the Erickson Project that never was: