South Park Takes A Whack At Finding Bigfoot: Did anyone else watch last night's episode? 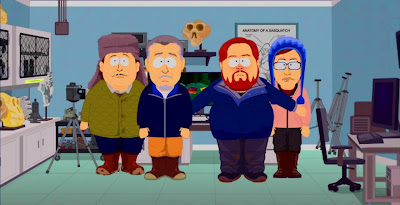 In the storyline, the Cartman character explains the legend of the "Jewpacabra" an elusive and cryptic creature that he says plans to attack the town on Easter and ruin it's big Easter egg hunt sponsored by a supermarket conglomerate. Characters Butters and Eric Cartman do an investigation trying to get footage of the creature. They manage to capture a familiar blob shot of the creature. That's when the "Finding Bigfoot" team show up.

After careful analysis of the photo, they declare it is genuine, saying, "This has never happened before. It's actually true." As usual the show is not terribly kind to the celebrities it lampoons, and this is no exception. The portrayal of lovable Bobo paints him as a not too bright buffoon. Matt and Cliff are shown as typically overly enthusiastic about the new evidence while curiously, skeptic Renee never speaks. But the team gets some revenge when they decide to dress Cartman up as a bunny and use him for bait to lure the creature in. The four hide behind a bush and watch with their visual aids.

I won't tell how it all comes out, not wanting to spoil it for those interested in watching. But the interesting thing is that in some sixteen seasons of the show, to my knowledge the names "Bigfoot" and "Sasquatch" have never been uttered until this episode, though an earlier episode focused on "Scuzzlebutt", a Bigfoot-like legend as told by character Eric Cartman. Let's hope the team doesn't get too offended, because as I mentioned in a previous article, it is said that being parodied means you have truly made it. And most of America loves Bobo, so let's hope he can laugh it off. I think if I were camping in the woods, I'd feel much safer with Bobo's company than the two "South Park" creators any day!

*Author's note*-- The references to Judaism and Christianity in the episode do not reflect my opinions nor the opinions of Bigfoot Evidence.


"I've heard mixed reactions about the episode (I haven't seen it yet), but I consider it an honor to be depicted on South Park no matter how much of a thrashing we receive at the hands of these ruthless, cynical animators."