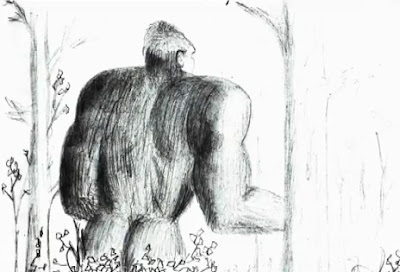 SnowWalkerPrime brings us another captivating interview with a Bigfoot eye witness. Mike Richberg, a South Carolina man recalls his astonishing sighting of a sasquatch while deer hunting in 1978. After hearing sloshing water and a disturbance in the brush followed by a grunting noise, Mr. Richberg observed what he can best describe as a combination between King Kong and Alley Oop (a 1930's era cave man cartoon character) emerge from a river.

Mike Richberg recounts his encounter with great detail, vividly recalling the sight that stunned him as a 14 year old young teen. Expecting to see a deer, he was ill prepared to see a massive, hair covered, man-like ape figure. The reaction of primal fear can still be heard as he relates his experience today, and he readily admits having been physically shaken from the event.

What stands out is his recollection of the sheer size of the thing he encountered. Mr. Richberg estimates the width of his back at around 3 1/2 feet, saying that it was so large it seemed almost cartoonish, comparing it to a chimp morphed into the 'Incredible Hulk'. Interestingly, he also noted that the creature had a football linebacker's gluteal region, with the overall V shape a bodybuilder would sport.

Listen as Mr. Richberg gives us an honest and forthcoming account of what he saw and the traumatic impact it made on him in 1978 that is clearly still palpable today.