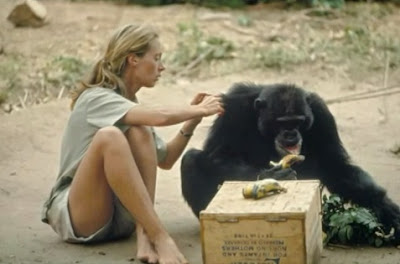 Bigfoot habituators are people who claim to have an established relationship with Bigfoots. From their experiences, some habituators have even written detailed information about the behaviors and mindset of these creatures. Skeptics looking for proof of on-going experiences of these habituators and Bigfoots often ask for some kind photographic proof. Disappointingly, most of the photographs have turned out to be ordinary "blobsquatches".

In the video below, SnowWalkerPrime talks about the so-called Bigfoot "habituators" and what they can learn from true habituators like Dr. Jane Goodall.

There is much talk in the Bigfoot biz about “habituators.” These are people, often women, who have supposedly developed a relationship with the Sasquatches around them. There was one in Tennessee and another, Janice Carter Coy, in Kentucky. Coy is apparently mentally ill. I believe she may have schizophrenia. I am certain that she believes she has been dealing with a family of Bigfoots on her farm all of these years.

Coy is the subject of a book by the gullible or worse Mary Green, Fifty Years With Bigfoot, detailing Janice’s life with the animals from the time she was a little girl to present. It details every conceivable aspect of Bigfoot life you could imagine, and even gives a list of the vocabulary of their language. Coy won’t let others come to the farm, because the Bigfoots only like her, and disappear when anyone else shows up.

Coy also says that Bigfoot hates having his picture taken, hence no photos or any other evidence.

Investigators have been to the Coy farm in Kentucky. It’s open country for miles around with a town nearby. There are no Bigfoots there, and there have never been any Bigfoots on that farm.

Unfortunately, serious researchers have been conned by Coy and some believe her story. This is another problem. There are many scientific minded folks working in the field, but they have not uncommonly been conned by the tidal wave of hoaxers. This degrades their credibility.

Some fool researcher from Russia moved into the farm and said he saw Bigfoot signs over a month. He saw no such thing.

Erickson bought the property and researchers promptly moved into the Coy home. Suddenly all the Bigfoots done disappeared!

Coy received a nice tidy sum for her farm and she bought a new place 80 miles away. Very soon after, Fox the Bigfoot and his family done showed up at her new place, and they haven’t left yet.

You can see where this shit is headed.

There was a similar case in Tennessee of a family that had supposedly habituated Bigfoots. Like Coy’s family, these Bigfoots also having the picture taken, hence no photos. The family put out pancakes every night for the Bigfoots (LOL) and the Bigfoots done eat them up come mornin. This family also hated researchers.

Erickson also bought this property and some adjacent properties too. They moved some researchers into the house but the Bigfoots only liked the Pancake People so they up and took off.

The Pancake People up and moved over to the next holler or so and what do you know? The Bigfoots promptly followed them over to the new place to get some more of those great pancakes!

Maybe hillbillies are not so dumb after all. They seem to be making fools out of these city slickers.

There was another habituation case out of Florida. It was written up in a recent ridiculous book called Enoch. A guy in Florida “lives off the grid.” This is becoming increasingly popular. These folks live in tents or campers or whatever out in the woods, often on national forests. It’s called free. But you’re “off the grid,” as in no electricity.

Anyway, there’s this homeless guy in the swamps/woods of Florida named Mike. He’s befriended a Bigfoot named Enoch. He and Enoch hang out a lot and share lots of good times and whatnot. He communicated to the fool author of the book though an endless series of email messages. We does not allow visitors and he won’t talk on the phone. She’s never met the guy. Like the Bigfoots above, Enoch is camera shy, so wa-la, no evidence.

The author is Autumn Williams, a “top Bigfoot researcher for 20 years” (LOL). Autumn grew up in a cabin in very remote woods with her mom, Sali Sheppard Williams. Williams is the author of a book about her habituation with a group of Bigfoots in Orting, Washington, Valley of the Skookum.

All sorts of funny business happened while the Bigfoots were out and about.

An Indian spirit guide showed up, UFO’s made regular appearances, weird orb lights appeared in the woods and over rivers, a mystical being called Dream Walker shows up from time to time, shape-shifting critters appear and disappear in the woods, both mother and daughter experience dreams at the same time of the same Indian spirit guide who guides them through past and present, physic vampires and energy drains are around and they can tire you out real quick, the Men in Black show up as usual, phantom trains appear in the woods only to vanish.

Extradimensional blue herons do their weird thang. She regresses and re-experiences some of her past lives as a reincarnated being. She experiences various forms of ESP such as premonition, telepathy, mind manipulation and psychometry. She encounters weird energy “vortexes” and gets spiritually linked to folks she has never met before.

Bottom line, few if any modern Bigfoot habituator stories are credible. It’s unfortunate that these occurrences are so highly regarded in the Bigfoot community, but that community is swarming with idiots, fools, assholes, crazies of every shape and variety, kooks, whackjobs, liars, frauds, hoaxsters, con artists and flakes that it all makes sense.

I think there have been habituators in past. The Albert Ostman tale from 1924 is credible (more on that later). American Indians from many tribes say that Bigfoot used to steal their women. Sometimes the women came back after living years with the Bigfoots. In some cases, the women even bred with the Bigfoots. I regard all these stories as credible, but more on that later.