His Video Proves Bigfoot Is Real 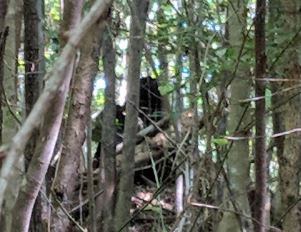 A man from North Carolina is claiming his new video proves bigfoot is real.

Walking through the woods with his dog, steadfast companion Crazy Daisy, Teague was attempting to recover some trail cameras he’d put up when he heard some wood knocking sounds. “I just passed it off as a woodpecker,” he said. Then things changed. Something in the woods was throwing rocks. Excited, Teague said he took out his phone and started videoing the experience. He was also able to snap some photos of what he claims is Bigfoot sitting down. When asked how he knows that he didn’t take a photo of a bear he said: “Bears don’t throw rocks.”