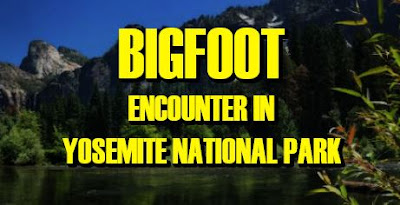 From the Phantoms and Monsters blog site comes an encounter out of Yosemite National Park.

This incident occurred on August 5, 2017 near Yosemite National Park, California. My ex fiancée and I were avid climbers, hikers, and explorers of the Sierra Nevada mountain range and we decided to go up to Yosemite to climb. Now Yosemite is stupid crazy to get campsite reservations, so we decided to stay on BLM land a few miles down the 395 from Mammoth where we didn’t have to pay for camping.

We pitched our tent and got settled in, made dinner then I went to go set up our trash bag about 1000 feet from camp (I don’t like having bears close to my tent). It started to rain a little so we went into the tent and went to sleep around 2030. It was probably 0130 on the 5th it had stopped raining and I had to take a leak. So I put my flip flops and head lamp and start walking to the spot where I figured it’s far enough away that it wouldn’t attract anything. Now it had just stopped raining and it was dead quiet, but I dismissed the silence as everything was hunkered down. So from where I was taking a leak The trash bag was about 200 yards to my right. As I finish up I look to make sure the bag wasn’t blown down during the relatively heavy storm that just finished up and it wasn’t in the tree. So I look at the ground and saw the biggest black bear I’d ever seen, so I start hollering and screaming making a lot of noise to scare it off. Then it f**king stood up and looked at me. It was completely covered in hair, stood about 8’ with shoulders as wide as a meter stick. After a few seconds, it ran off. I headed back towards the tent and sprinted the entire way.