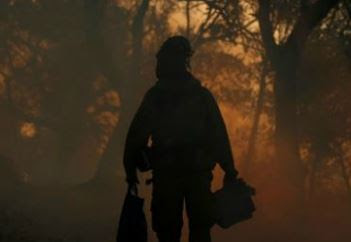 A forest firefighter shares stories of some of his encounters with high strangeness while on the job.

“I was firefighting in Mt. Hood in 2017, our base camp was in the middle of the woods. We had showers, kitchen staff, and access to portable restrooms with at least 500 personnel. We were fighting fire near a lake and park service that we needed to stay away from. Law enforcement was everywhere. I even saw black undercover vehicles. I wasn’t the only one and we were sure we weren’t the only fire crew out there. Weird thing was there were no insects, animals, no flies, I mean nothing but vegetation and trees. Our crew boss had told us they he had seen surveillance cameras hidden in trees and that there was something really strange going on and he was referring to government. I was a replacement for one of the guys so I was on my 5th day or so out there. It was also my 3rd year fighting fire.