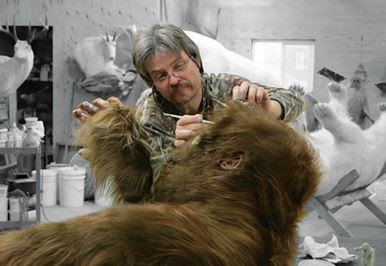 A new bigfoot movie is finally coming out, but this one is different than your typical documentary of grisly horror film. This is the story behind a taxidermist creating a bigfoot.

Wayne had an idea for a film about what an underappreciated art form taxidermy is, and he had been working on a project with about ten taxidermists, but he dropped his work on that film as he started to get to know Walker. Wayne signed up for one of Walker’s coyote taxidermy workshops, and sent him a message through the forum. He told Walker that he was a filmmaker and was interested in making a documentary about taxidermy. “I told him we could have a beer and sit down for an hour or two and talk about it while I was in the area. He told me he’d call me in a few minutes. When he did, we talked for about an hour, and all he talked about was big foot. And when you meet him in person, that’s always the case too. When he told me he was going to do a recreation of bigfoot, I knew: this is a story right here.”