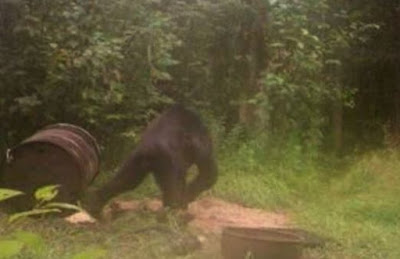 From the Phantoms and Monsters blog site:

Lon - here is a bigfoot story I was told by a Navy buddy when we were stationed in Bremerton, WA. He said before going into the service he worked on construction in the Sierra Nevada's of Northern California. They had many 55 gallon drums stored with gas, etc. for the equipment. On returning one morning they found the drums missing and saw large footprints going from where the drums were to the edge of a cliff. They then saw where the drums had been thrown over the cliff and landing below. These drums weighed around 500 hundred pounds and they had been carried not rolled to the edge of the cliff.