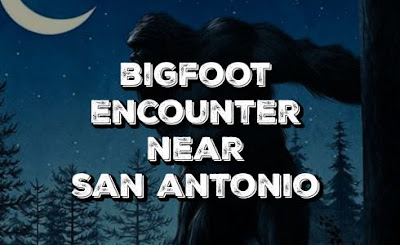 From the Phantoms and Monsters website comes an encounter story from the great state of Texas. This incident reportedly took place near the heavily populated area of San Antonio.

A few nights ago, the alarm on her driveway was triggered. Since there had been significant rain in the area lately, she decided to go outside and check the battery / wiring to make sure that it hadn't been compromised. As she was examining the module, she heard a rustling sound and then a frightening growl behind her. The sound was coming from the direction of her van in the far end of the driveway. When she turned, she encountered a dark hair-covered being that stood at least a foot above her van. Her description was that it looked like the Bigfoot in 'Harry and the Hendersons' as far as overall shape...but that it bared its large teeth and that the eyes were reddish-yellow. She also noticed a distinct odor...not foul, but similar to Pine or Spruce. It continued to growl at her in a threatening manner. She quickly ran into the house and told her fiance. He grabbed a firearm and went out to check...but the creature was gone.

BH has lived in the house for 18 years, but has only noticed activity in the past 2 years. She states that they have seen 'eye shine' from the trees in back of the property (Maple, Mesquite, Cedar) several times. There has also been pet mutilation in the neighborhood during this time period. The nearby residents are keenly aware of the activity. One neighbor has gathered physical evidence. She is afraid to be outside at night. She is an artist and has enjoyed amateur astronomy...but does not feel safe in her own backyard.