Man Recounts His Encounter With Sasquatch 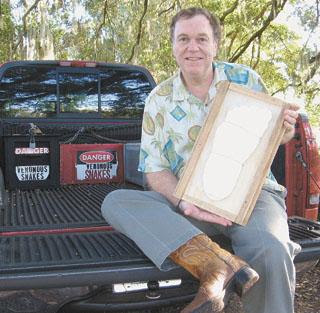 Dan Jackson didn't grow up a believer in bigfoot, but that didn't stop him from having one of the most terrifying experiences of his life with one.

In the early-morning blackness, partially bathed in a Hollywood-weird glow of incandescent light and rolling fog, Dan Jackson slowly uncoiled from a half-hour crouch in his hiding place behind a garbage Dumpster.

What he saw, the very thing he had spent 20 years looking for, was so terrifying, Jackson would see it in his broken sleep for months.

''He was huffing like a damn freight train,'' recalled Jackson, a venomous-snake expert from Lithia, who claims he came face to face with a fearsome creature he once didn't believe existed.

''In November 1983, if you had asked me whether I believed in Bigfoot or Sasquatch, I would have said, 'You mean that thing Hollywood made movies about? Are you crazy? No, of course not,''' says Jackson, an experienced outdoorsman who trapped alligators before he began extracting venom from snakes.

His opinion changed on a hog-hunting trip in a bayhead of sawgrass and cypress bog near Naples.

Jackson was tracking a ''bunch of hogs'' he had spooked when he became a believer.

''As I was looking into the sun, I saw a dark object about 150 yards away. I thought, 'Good, I'm going to have bear steaks tonight.' That's when what I thought was a bear, turned out wasn't a bear,'' Jackson recalls. ''It had been bending over, then it turned at the waist and looked at me. It had a black face and black eyes. It stood up and turned and walked on two legs right into the bayhead.''

Jackson was momentarily paralyzed with fear.