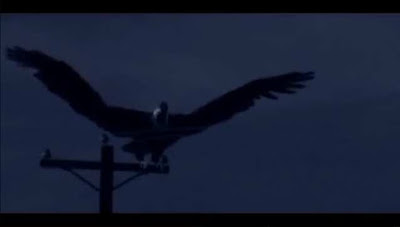 Two people in California reported seeing a 'thunderbird'. From cryptozoologynews.com:

The Californian claims that he was driving at around 65 mph when the “huge bird” showed up.

“It swooped down from my left and leveled off in front of my vehicle, and flew along in front of me about 20 to 30 feet in front of me. I instinctively hit the brakes when this object appeared in front of our car,” he explained. He didn’t specify who the other person in the vehicle was.

The man described the creature as a 30-feet-wide black bird with “features similar to those of a hawk”.

“The wingspan covered the width of the two-lane highway. Its wings seemed to undulate because of it’s huge size.”

The animal, he said, “continued to fly at around 10 feet off the highway and then lifted off to the right and out of sight”.