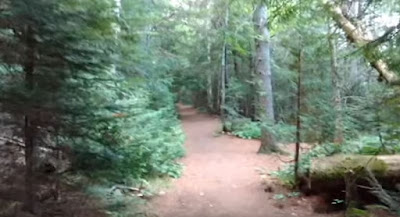 Blayne Tyler posted this video about a strange sasquatch encounter during a camping trip in Algonquin Park.

July 2016 camping trip to Algonquin Park. We were in camped in the eastern part of the park. At dusk on the Saturday we went for a hike along on trail in the west part of the park. The trail passes by a stream which is used as a canoe route. While passing by we heard branch breaks and heavy ground stomps. We were expecting a moose. I returned to the site after dropping my wife off and took some pictures of the area at sunset. Later on back at our tent at 3 am Early in the mourning 3am I was awakened with a 7-8 second dual pitch scream. I've heard this scream a few times before, it was the vocalization of a Sasquatch. Some how they located me on the opposite end of the park 40 minutes drive by car away from the stream location. Note: Because of the scare factor my family I enjoy our camping instead of hard core footing. We left the next day but that mystery of that strange encounter will not be forgotten.