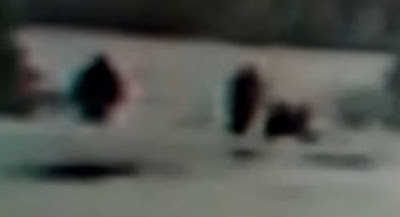 That's right, the famous bigfoot of Yellowstone made a return trip to their old stomping ground on Christmas day, and wouldn't you know it, they got caught on the parks web cam again!

Bigfoot family of six captured on video on Xmas day at Yellowstone? Watch it til the end and see something very unusual that was captured off of Old Faithful's live cam on Christmas day 2016. It all began during a lull in the geyser's eruption cycle when the Yellowstone cam was turned to view another geyser erupting far away. As I watch my monitors I noticed that the location looked familiar and that's because of the "Bigfoot vs Buffalo" video that was filmed by Mary Greeley in the same general area. Then I noticed something moving around, grabbed my cell phone and started filming what appeared to be two individuals, dressed in black, sitting down in the snow. Soon a third figure appeared, then a forth, and finally two more joined the group and all dressed in black. The four new arrivals stood shoulder to shoulder all facing the same direction towards the Yellowstone webcam while the other two remained sitting in the snow. The webcam operator suddenly zoomed out and swung their camera back on Old Faithful. I think the last four are the same guys from the "Bigfoot vs Buffalo" vid. My biggest fear is that because of the poor quality nobody will watch it or think it could be important. Sure the video is awful and blurry but look at it a couple of times and you realize it is still good enough to make out what is happening. You can see them interacting with each other using hand gestures pointing out things in the distance and even patting one another on the back. My 10 year old nephew pointed out something I had missed. The last bigfoot to appear in both Mary Greeley's video and my video is the biggest one. Also the first video implied they were possibly hunting buffalo but the direction in which they're heading leads to where I filmed them. In other words that is where they live!