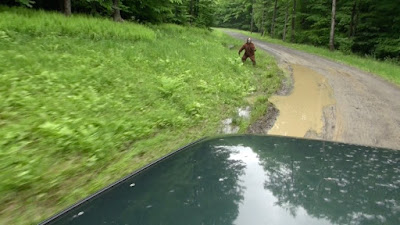 Ore. — An Oregon driver says he came upon a Bigfoot creature on U.S. Route 97 in the northern part of the state.

Orlando Gutierrez, a 35-year-old operator, told Cryptozoology News on Tuesday that the purported animal was standing in the middle of the road as he drove through a “government camp” by Mount Hood.

“It was standing on a few feet off the road, standing all casual, wanting me to stop. I had barely spotted it so I when I pulled over I was gonna jump out,” he said about the summer 2015 encounter. “That part of the mountain the government posted a sign that there is some around there, that is what was really weird, but to know that we ain’t the only ones alive.”

Gutierrez added that the biped appeared to be friendly and only described it as exhibiting a “light tan” color and “shaggy”. He claimed that the sighting lasted about 4 minutes.

He claims there was another person with him at the time of the sighting, but he did not wish to disclose the name.