The Mande Barung - Bigfoot Of India 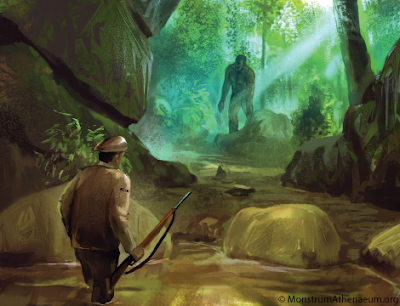 Stories of bigfoot type creatures span the globe. One of bigfoot's lesser known cousins is the Mande Barung, India's own version of the sasquatch. Not much evidence has been available to support the creature's existence outside of tribal stories, at least not until recently.

Generally regarded as a part of the landscape for those living in the area; it’s uncertain when the first sighting of the Mande Barung was reported. However, the cryptid has been enjoying a recent surge in notoriety thanks to a famous sighting which occurred in April 2002. Forestry officer James Marak and his team of fourteen were conducting a routine survey of the tiger population in Balpakram. The team reported observing a figure which they described as Yeti-like in stature and appearance. However, Marak isn’t the only one in his family claiming to have seen the creature. According to the family, Marak’s son also saw it and his grandson claims to have seen unusual foot prints eighteen inches in length. Despite the multiple sightings, his family members believe the matter wasn’t seriously investigated at the time because authorities were ‘uninterested and lazy’.

Five years later, similar sightings reported in 2007 forced Indian authorities to announce a scientific study to examine the credibility of the tribal villager’s claims regarding the Mande Barung. Not only did at least half a dozen villagers report seeing the Mande Barung during a three week period, but they also saw more than one creature at a time. They observed a group of two adults and two smaller creatures resembling a family. They were huge and bulky, covered in blackish-brown fur and their heads looked as if they were wearing a cap.