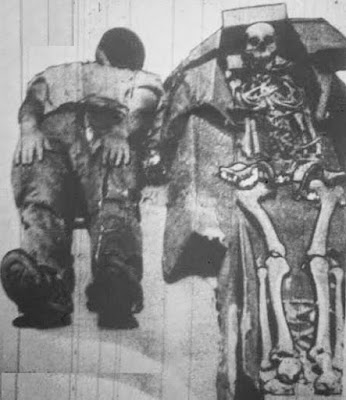 According to the article, a young boy was out hunting arrowheads in a Missouri cave when he discovered the remains of a human-like skeleton of giant proportions. The description in the article sounds very similar to how many describe the appearance of bigfoot. Could this be the skeletal remains of a sasquatch, and whatever happened to the bones?

This quiet little summer resort town of the Ozarks has just come to grips with an absorbing mystery of a sort it has never before been called upon to solve. It all came about as a result of Billy Harman's hunt for arrowheads a few weeks ago.

Poking about in Puckett's Cave in a Meramec River bluff some 10 miles northeast of here, young Harman reached for something white in a hole in the ground and, to his vast amazement came up with a handful of human bones. Soundly startled, the 16 year-old lad put them down and dashed for home. Then, after gathering his courage and some reinforcements, he went back and proceeded to dig on the site of his discovery. From the ancient accumulation of ash and limestone debris he turned up the complete skeleton of an 8 foot giant. The grisly find was brought to Dr. R. C. Parker here and stretched out to its enormous length in a hallway of his office where it has since remained the most startling exhibit Steelville has ever had on public view. People have come from far and near to examine it and fire a broadside of questions at the harassed doctor.

Who was this giant? When did he live? To what race did he belong? Was he simply a freak among people of normal stature, or did he belong, possibly, to some extinct race of stone-age giants who roamed over these hills before the coming of the Indian? What was the manner of his death? Did he come to his end from natural causes or does that lone arrowhead found among the bones tell its own story of violence? Was he, perhaps, an Ozark Goliath brought down by some David of the Missouri hill country who used a bow and arrow instead of a sling?

If anybody can answer these questions he is pretty likely to find a warm welcome in Steelville, especially at the hands of Dr. Parker. Anthropologists are scarce hereabouts and the doctor's fund of information about such things was exhausted in the first 20 minutes. An appeal to Dr. Ales Hrdlicka, anthropologist of the National Museum in Washington and a celebrated authority on primitive races is expected to help. Dr. Parker has written to him, offering to forward the skull or the whole skeleton, if necessary , for scientific study.