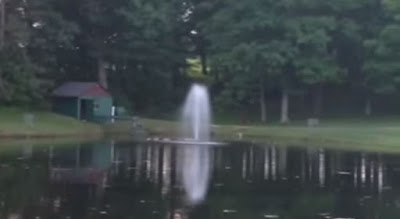 Apple Valley, Ohio. The Finding Bigfoot crew has been to Ohio many times before, and they've found nothing. Well. We think it's time to check again, this time they can skip Salt Fork and head over to a golf course in Apple Valley. YouTube user Harold Cuerpo claims the creature was seen drinking from the pond. The video very isn't clear but there's a lot to breakdown here if you're into video breakdowns. Cuerpo explains the video:

I agree that the quality was poor.  The person that sent it to me stated that it was from his cell phone and it looks as if he was quite a bit away from the creature.  He told me that the group of golfers ahead of him went to see what it was, but that it had disappeared before they got to it.  Not sure how, because the course is not that heavily wooded.