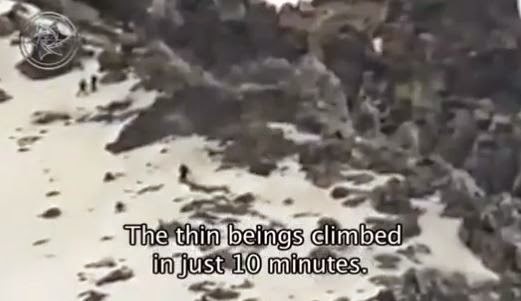 The Popocatepetl volcano in Mexico isn't usually known for its Bigfoot sightings. There's been plenty of "paranormal" stuff there such as unidentified objects floating around the volcano, but no giant beings  -- until now. One of the most hair-raising story to come from that area is a footage of what a mountain rescue crew claims to be giant beings. The rescuers explained how they'd witnessed the creatures climbing up slopes at super-human speeds. The subjects in the footage appear to be brown in color, and very thin. According to the witnesses, they were not wearing any visible clothing:

Once, we saw one of these individuals climb up the glacier in 10 minutes, a stretch that we linger about 3-4 hours to go. They have an amazing agility.


Among other things they've witnessed were giant footprints:

His footprints are very large, the part corresponding to heel leaves a hole, something that resembles a claw which apparently serves them – like a propulsive support – in these dislocations impressive through the snow and ice.