Is This Amazing Story from the Late 1800's True? 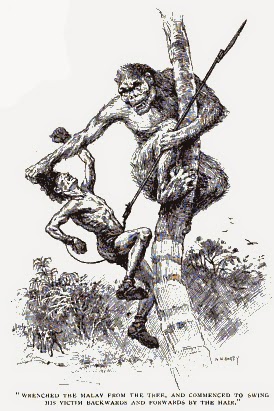 This story comes from an essay written in 1901 about a hunt that took place for a creature known as a Mai-as, or "Man-Monkey". The story sounds amazing, but is written as if it is a factual account of an event that took place in the late 1800's. Is there a skeleton stored away somewhere of some sort of creature that was possibly a missing link?

The brave fellow first fixed on his hands and feet coverings of hide with strong thorns fixed therein to enable him to get a hold of the slippery bark, which offered no projections or footholds whatever; and taking with him a "shooting-iron," he resolutely began the ascent. This "shooting-iron" is really a blow-pipe, somewhat similar to that used by the Indians of the River Amazon, but having a sharp spear-head firmly fixed at one end in such a manner as not to interfere with the passage of a dart through the hollow pipe.

Breathlessly the onlookers watched the young man as, foot by foot, he crept up the tree, until when within about 8ft. of the Mai-as (who so far had showed no inclination to move) he raised his weapon and prodded the animal in the leg, whereupon the huge creature retreated higher up the tree. The Malay crept after him, and repeated his spear-thrust, and again the Mai-as retreated, while the daring hunter followed him.

Afraid that the tree would not bear his ponderous weight if he went any higher—it was already beginning to sway dangerously—the Mai-as stopped and, leaning down, stretched out one hand, and with a lightning-like movement grasped the iron spear - head. Then he commenced to pull, and hand over hand, hanging on solely by his muscular legs, he commenced to haul up the wretched Malay, who was powerless, the blow-pipe being attached to his wrist by a strong leather thong.

Little by little the powerful brute drew up the man until, holding the blowpipe with one hand, he reached down with the other and wreathed his huge hand in the thick, luxuriant hair of the miserable native, who, paralyzed by fear, could do no more than gaze at the savage face of his captor with terror-stricken eyes. Spell-bound with horror, the Englishmen below then saw the Mai-as with a single twist wrench the Malay from the tree and commence to swing his victim backwards and forwards by the hair, chuckling all the time with fiendish satisfaction.

Too fascinated with horror to use their rifles and slay the monster or else kill the man and put a merciful end to his sufferings, the hunters watched the wild man swinging the Malay faster and faster until, with an unearthly yell of devilish malignity, he hurled him down. The wretched man turned over and over as he fell, and came to the ground with a heavy thud that sent a sickening thrill through the hearts of the watchers. They rushed to the spot, but it was too late—the man was stone dead.

Furious with rage one of the Englishmen raised his rifle and, hastily sighting, fired. The bullet struck the Mai-as fairly in the ribs under the left arm, and with a cry the brute slid to the ground, where for one- brief moment he supported himself against the tree, with one hand on the wound. Then with a groan, quite human in its intensity, he pitched forward on his face, dead.

It should be mentioned that the party, after the unsuccessful hunt related, relinquished the idea of securing a live specimen, and the dead body of the monkey having been skinned and the flesh removed, the skeleton was brought back to England, where it remains in the possession of the owner of the yacht who had organized the expedition.