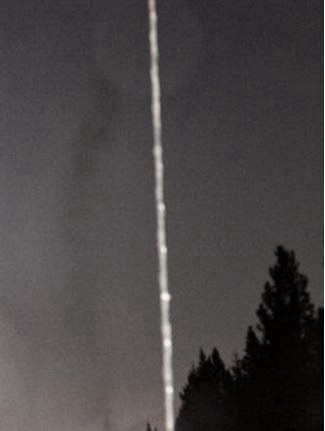 This is one of the strangest things I've heard in regards to bigfoot. A witness reports seeing abnormal insect activity, and photographs a strange beam of light in an area where a bigfoot researcher had been making bigfoot calls. Granted, the beam of light looks a bit suspect in my opinion, but who knows. What do you think?

"The witness notes that a Bigfoot researcher was in the area September 1, 2012, and had "recorded a very long Bigfoot call" at 8:30 p.m. The witness and her husband were in the same area traveling home on September 2, 2012, along a stretch of road seven miles long.
"We looked up and saw black streaks in the sky," the witness stated. "They were swarms. I didn't hear a sound and I know that they weren't bees or locusts; we thought they were mosquitoes. The swarm only followed the road and the multitude of them ran longer than the length of the entire road (7 miles). We knew that this was a highly unusual activity and decided to pull the truck over and park."

For the rest of this head-scratching article, follow this link.