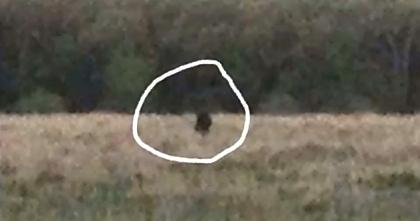 This footage was taken in Florida near Myakka State Park﻿ Rd. using an iPhone4S. Though the footage unzoomed and pixelated, a figure can cearly be seen walking in the distance. YouTube mopower08 says the creature looked like it was hiding in the grass waiting to pounce on a deer.

This is real footage my son and I took in Myakka March 2, 2013. We had iphones with us only. You will see actual still shots of this thing. The only editing we did to these pictures was to lighten them up some. At one point you hear us talk of two, it was deer out there hiding in the tall grass. Maybe what it was after. To see it on video pause around 2:03-2:08. You can see it in the middle at the thin tan line of grass just under the tree line. Also here you will see the deer to the left a little closer in. They seem to appear several times then lay back down.


This latest video from Florida is impressive and it will be interesting to see a breakdown on it. Phil?
footage