More Evidence That Bigfoots Communicate And Travel Along Power Lines 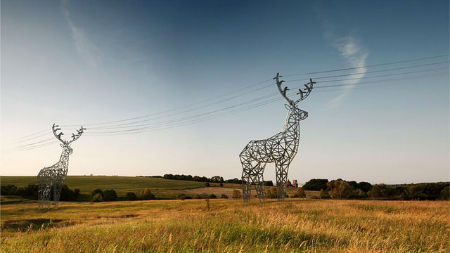 Bigfoots have reportedly been using power line trails for traveling and communication. According to researchers, its high tension lines can be used to send knock signals for miles. Tim Fasano, a Florida Skunk Ape hunter, believes large animals use power lines trails as safe travel routes to areas that are difficult to access off trail. "Power lines have been cut out in a wide and deep swath that will gain you access to areas that are off trail, and difficult to get to, and areas where a large animal has food and water and hiding spaces," Fasano said in a video about Skunk apes and power lines.

This latest BFRO Bigfoot sighting report is more possible evidence that Bigfoots utilize our power line structures. A Navy veteran in Oklahoma traveling along HWY 259 claims that he saw large biped figure on a powerline trail near Octavia:

On the evening of January 4, 2012, my fiance, her grandmother, and I were driving back to Broken Bow from my fiance's baby appointment in Talihina, Ok. I had just awakened from a nap-i was riding in the back seat-and I looked out the window to see about where we were. I had noticed that there was a power line trail on a hill that was near the hwy we were driving on. Next to a power line pole was the silhouette of something large. I say silhouette because the sun was on it's way to setting, causing the side that was facing me of whatever was standing there to be shadowed. Within a second of me spotting it, it ducked to it's left into the wood line. This was not a bear-the shoulders were clearly defined and it looked to large to be a person. Now a short background of myself, I am prior military, have never done drugs, and have been around woods all my life. My attention to detail is immaculate and I know when something is out of place. I know what I saw and will stand by my story. Also as an avid bigfoot follower/believer I have a habit of checking power line trails when passing by. To me, there is no other explanation-i have no doubt that was sasquatch.