More Sounds From Central Michigan, One of The Most Active Locations In The U.S. 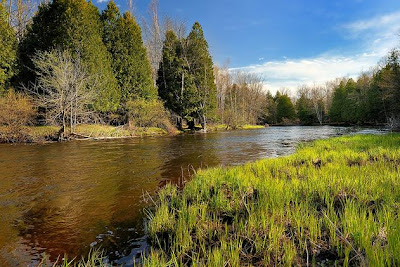 BFRO investigator Jim Sherman has recorded some interesting vocalizations in Central Michigan. Some of his recordings from Isabella county includes a knock response and 20 minutes of howling. Matt Moneymaker claims Sherman's research location is probably the most active site in the U.S.

Here's another audio clip from the same area in Central Michigan. This recording was made in early April 2011. After he heard the following sequence of unknown vocalizations, Sherman said he was pumped up and made the decision to camp at the the same spot for a few days. "The whole thing fired up the barn animals and the coyotes and lasted for over 20 minutes. I make no claims as to what this is but it coincided with coyote vocals and was very interesting," he said.

Central Michigan. Taken from a fence post facing northeast. Around 11:30pm. The coyotes started the cacophony along with the local dogs, the goats and horses began to respond soon after. The whole clip lasted for 20 minutes but I eliminated most of the obvious coyote and dog howls and barks. The loudest of the vocals came from about 400 m away near a clearing I would camp in 4 days later...not a lot of sleeping that night.