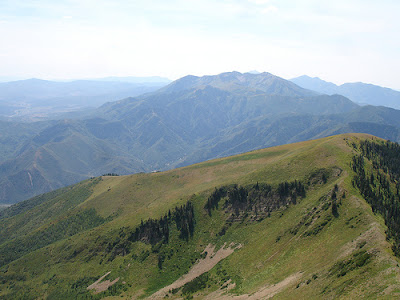 In September 2005, a couple decided to drive up to Covered Bridge Canyon near the southeast corner of Maple Mountain in Utah to look at fall leaves. After viewing the other side of the canyon for a bit, the husband and wife started to feel like they were being watched. When the two got back into their jeep, the husband saw a "big fast black hairy object" in the corner of his eye. The man looked up at his wife and the woman was frozen. She told her husband she was watching this creature the whole time while she was sitting in the jeep.

According to the witnesses, they said that it was squatting before it ran. The husband said that even while it was running it remained squatted down, making it appear to be only three or four feet high though he could tell it was actually taller than that.

OBSERVED: Ok my wife and i decided to look at the fall leaves in covered brige canyon just off highway 6 about five minutes up spanish fork canyon. Instead of parking off the side of the road i decide to drive the short way up to the sterling hollow trailhead, so i get to the trail head and turn the jeep around so we could veiw the other side of the canyon. We decide to get out and we are standing in front of the jeep talking quietly, and my wife says she wants to sit in the jeep so i ask her why and she says she dont feel good about standing there, i had also noticed that uneasy feeling and agreed.

I opened the passenger door for her then went around to the driver side and got in. I found the keys and started to start the jeep when i looked at my wife who was staring at the small gassy flat. I turned the key and a big fast black hairy object made me turn my head to the left, and i saw it run very fast into the thick oak trees. It looked about 6 feet tall hunched over, but it covered alot of ground fast. I saw it for only a few seconds. I looked at my wife, she sat frozen and i knew what i saw ( i thought it was a bigfoot) so i asked my wife if it was a bear she said no so i asked if it was a moose she said no so i asked if it was a black cow and she said it was a hairy bigfoot. She said she had watched it the whole time after i let her in the jeep and got in myself till i started the jeep, and she said it was a bigfoot.

I hightailed it out of there and returned at dark with hunting equipment to track it, but only found where it went through the oak, the leaves were deep and the bank was torn up. i have been a avid hunter my whole life it was not any animal known to me, i know it was not a bear moose, elk ,cow,or anything i have ever seen.

ALSO NOTICED: before the sighting we were standing in front of the jeep looking at the leaves in coveredbrige canyon,i felt uneasy like something was watching me and i was right, when i saw it.
OTHER WITNESSES: yes my wife was stareing into its eyes as it was hunkered down in the flat.
OTHER STORIES: no
TIME AND CONDITIONS: Just 1 hour before dark , the light was very bright.
ENVIRONMENT: montanious flat with oak trees surrounding the flat terraced like flats with oaktree borders.

The submitter of the report said that his wife has no idea how long she stared at the creature, but that it seemed like it was quite a few minutes. He said that it was squatting and then ran. He said that even when it ran it was squatted down, making it appear only three or four feet high, though he could tell it was actually taller than that. He estimated it to be anywhere from five to eight feet tall. The submitter also said that the creature had Blackish-brown hair about six inches long, but added that for him the thing looked like a quick black blur. He said he's a hunter and has seen elk and other animals, and that this was faster than anything else he's ever seen. He said there's a thick grove of oak there and that above them was another flat, with yet another flat above that. He said the creature ran up the mountain – headed for the oaks.

After talking to the submitter of the report I was also able to talk to his wife. She talked about being too freaked-out to move or say anything. She said the creature had a total human shape, but covered with hair, and she said it looked more human than the bigfoots she's seen on TV – with the ones on TV looking more ape-like. She added that it was bigger than a man. The creature was a big dark spot in the fall colors.

The witness said she will not forget the experience. To me it seemed like she's really conflicted about the experience - not wanting to believe she saw what she saw, but that having no choice because she definitely saw it, and actually stared at it for quite some time. She said her kids laugh about her experience and other people make fun about it as well. I really think more people would talk about their bigfoot experiences if other people didn't respond that way.

Some of the physical characteristics reported by the witness are as follows: it had straight, dark brown hair all over the body, including on the ears, but shorter on the face than elsewhere. The nose was barely visible because of the hair. It had dark lips and you couldn't see the teeth. The head was shaped more like a human head than a gorilla's head. No neck was visible because of the long facial hair. When it moved it looked like it was hunched over, trying to run but stay hidden. It's legs looked different than a bear's legs, with what appeared to be feet rather than paws.

The witness evidently did a sketch of what she saw but no longer knows where the sketch is.

I feel this is a particularly valuable report because the primary witness was able to see the creature for such a long time and at such close range. I am convinced that both witnesses are credible and saw the things they reported seeing.