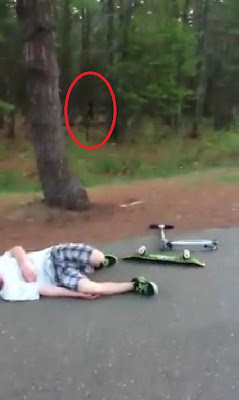 This could be a new trend folks. Four new "Bigfoot" videos in less than 2 weeks.

Now that every child old enough to carry a cell phone around can record videos, it's more than likely that someone will inadvertently film a "Sasquatch". Thanks to TV shows like Finding Bigfoot where everything could be a Sasquatch, these kids were probably thinking the same thing when they saw a dark figure moving in the trees.

Here's the latest "Bigfoot" footage filmed by some 15 year old. While he was filming his friend who had just fallen off his skateboard, you can see a dark figure walking in the background, from right to left. This is unusual as most footage shows the Bigfoot moving from left to right.

In the video description the kid wrote this: "I was filming Arthur for a scooter stunt and I noticed something funny in the background if you know what it is leave a comment."