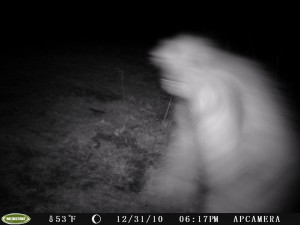 We could have sworn we've seen this photo before of a purported Bigfoot walking past the trail cam.

The photo is from a recent article published in www.buzzbinmagazine.com, and the story goes like this:


Editor-in-chief Michael Nasvadi received a tip about the sighting of the beast just south of Massillon in Strasburg. One of his sources presented him with photographic evidence (see picture above), captured by a deer cam, of an alleged Sasquatch.


The editor decided to send one of his "staff ace" to check out the source's claim. When he got there, he was shown the photo above along with references to show how big the figure actually is, compared to deer photos caught on the same trail cam. 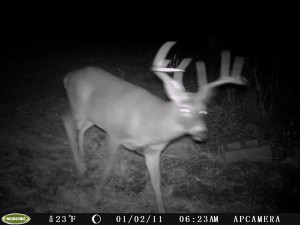 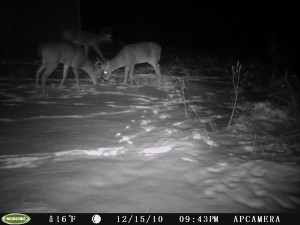 When the editor arrived at the scene, this is what he learned about the photo:

We arrived an hour or two before dusk at the source’s home (our contact wished to remain anonymous), which lies on a winding road, surrounded by woods and sparsely located neighbors. The time of our arrival was planned to coincide with the activity of our subject: Maisel said Bigfoots are primarily active from dusk till dawn, though not exclusively nocturnal.

Our source invited us in to see the original photo sent to our editor as well as other photos of deer he caught on the camera, so we could get some perspective on the size of the beast.

In comparison, whatever was captured in the first photo was certainly not a deer, standing roughly six feet tall and with limbs too thick to be confused with the slender appendages of a Cervidae. From the photo, the creature appeared to walk upright, with arms swinging in a motion similar to that of a human. The source also showed photos of animals moving quickly across the camera, which only snaps pictures when it senses movement and heat. These photos gave us an idea of the type of blur trails the camera picks up during low light. It became clear that even a deer, standing upright and flailing its legs, would still not appear to have the mass of the animal caught in the photo.

He also explained to us the inability of the camera, in low-light situations, to pick up colors on subjects positioned close to it. While the photo appears to be picking up a white creature, that may not exactly be the case.

With an idea of the size and dimensions of the creature in the photo, we made our way to the location where it was shot.

Since this was in the far corner of the source’s property, it’s hard to imagine someone finding the place to conduct some sort of hoax. Our source also explained that the only people near him who knew his camera’s location were people he was with that night, celebrating New Year’s Eve.

As we approached the scene I let my keen journalist observational skills pick up on any of the clues Maisel told me about, including footprints, stick piles in unnatural places and Bigfoot’s signature odor.

“It is a sewer smell,” Maisel said. “A sewery, garbage smell, but not too overpowering.”

Of course, the snow that fell the night before would have covered any prints made during the days leading up to our arrival. With no physical evidence about, the source positioned the deer cam to focus on where it was when it took the photo.
We took a few photos with the deer cam to further establish size, all while keeping an eye out for other signs of Bigfoots: ape-like grunting sounds, knocking and rock-throwing.


We did a comparison check by increasing the brightness level on the original photo. Some more details emerged, and we noticed the "leg" taking on a different shape.