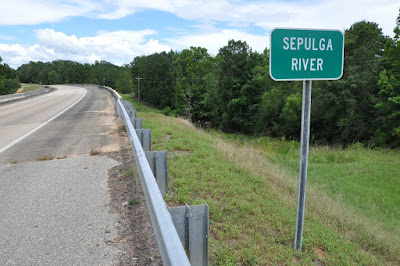 A person reported seeing a solid black, hair covered creature on two legs run across the road near a bridge crossing the Sepulga River in Alabama.

“As we approached Sepulga River, we saw a moving figure run straight across the bridge in front of us,” the witness said. “For a split second, I thought it was a person, running across the bridge.”

The witness said he quickly changed his mind when he was that the creature was “solid black.”

“It ran very quickly with its knees appearing to be bent while it kept its head and upper body very erect,” the witness said. “It jumped over the railing. It raised its arms to the sides as it jumped, and they seemed to be very shaggy.”

The witnesses lost sight of the creature after that, but others many have seen the strange animal around this same time.

“There were cars behind us on the road,” the witness said. “We also saw parked vehicles near the water. Possibly those people saw it too, though I couldn’t say for sure if they did.”