Dude Changes His Mind About Bigfoot Being An "Entertainment" After This Happened To Him... 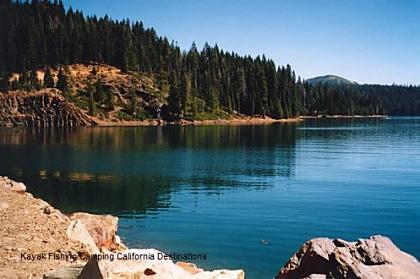 Thanks to Matt Moneymaker for sharing this story with us from a guy named Thomas S. who was camping with some friends near the French Meadows Reservoir in August 2012. This remote, forested basin is located on the American River approximately 58 miles east of Auburn in the Sierra Nevada's. Before his encounter, the man thought Bigfoot "was just for entertainment purposes", but he changed his tune when he ended up with messy drawers that night. "That will teach to goof on our show," says Matt.

my friends and I were camping near french meadows res in the sierra nevadas last august..... we were basicly messed with all night by something.... while it was still kinda light out I was foolin around kinda pokin fun at bigfoot callin and wood knockin.....it was mostly a loke to me..... not thinking anything would happen at that point I thought bigfoot was just used for entertainment purposes.. but later that night we heard something massive in the water near where we were camping...... it sounded at first like maybe it was a large animal crossing the creek but as it got closer we could hear steps like a human... like two feet...walking up the creek in our direction... then I stopped.... so an hour or so goes by and we thought nothing else of it....... then a twig breaks about 20 feet from where we were sleeping...... my big giant fearless pig hunting dog lunges at the sound gets about ten feet from me lets out a whimper and crawls into my sleeping bag.... at that moment my britches got messy!!!! I have never seen him cower to anything!!!! I'm laying there with my .45 in my hand petrified at that point then comes the rocks!!! what ever it was decided it would be a good idea to throw rocks over our head onto the rocky creek bed.. then nothing!! about an hour later we hear footsteps wlaking in the forrest outside our camp about 10-20 yards out as whatever was out there stopped walking it let out a deep grumble growl sound that shook my insides!!!! this went on throughout the night i slept clutching my hand cannon with one eye open for the rest of the night... I know that whatever was out there diddnt want us there!!! I'm going back as soon as the weather permits it to find out what that was!! I even let off a couple of rounds that night and whatever it was diddnt scare!! a human would have bolted along with every other animal I can think of!!! and it was so dark out there no human would have been able to navigate the terrain!!!so what was it?? I have to find out!!! its been eating at me for a while now!!