What Caused Todd Standing To Quit? 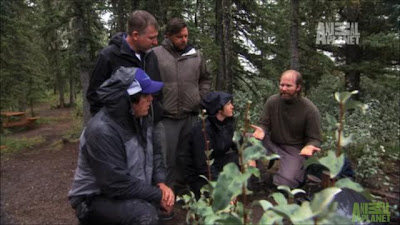 On Sunday, Todd Standing announced he was closing his Facebook profile, while the fate of his biggest project, Bigfoot North hangs in the balance, many are wondering what's next for the Canadian Bigfoot researcher. His story didn't begin with Les Stroud, or Dr. Jeff Meldrum. It goes back pretty far. Has the uphill battle to prove the existence of Bigfoot proven too much? Does everything end with Bigfoot North (which only raised $1,235 out of $900,000)? Or does he move on without the support of the Bigfoot community.

In the beginning, he didn't need the community's support. The media was all he needed and he had no problems getting attention. The Canadian media plays him up really well, and has never questioned the authenticity of his claims. While his support in the Great White North seems to be holding strong these days, his support is dwindling elsewhere, and no where is the opposition more apparent than on social media. News now travels fast, and everything you say or do is broken down in a matter of minutes. Standing's last public appearance in Washington made it on YouTube hours after the event. This allowed antagonist and skeptics (who already had their knives sharpened even before the event) to analyze and break down every part of his claims -- the biggest debate was about whether his sister was a special effects make-up artist or not.

Negative social media buzz may have not been the deciding factor for Standing to leave Facebook and end his latest project. The cloud of negativity surrounding him probably goes back a little further than that. One of the most memorable moments was when Standing was featured on the Finding Bigfoot TV show. Matt Moneymaker gave Standing the benefit of the doubt when his team traveled to Canada. In September 2011, after filming in Canada, the crew released a statement that was posted on the BFRO forum. Surprisingly, they claimed to have debunked Standing on camera and said his tales were full of contradictions and couldn't stand up to their questioning. On TV, they didn't seemed as harsh. However, on the forum, it was all out in the open for everyone to see.

According to a post by forum user Bossburg, the crew had this to say about Todd Standing:

The wildly overblown, self-serving assertions made by Todd Standing in those Canadian newspaper articles are quite misleading. We interviewed Todd Standing, as one of several witnesses in Alberta. He used the opportunity to drum up publicity for himself in Calgary papers. That's what he's all about -- he's a publicity hound. We interviewed him and basically debunked him on camera. His tales were full of contradictions and couldn't stand up to our questioning.

Usually the four investigators are not unanimous when some of us feel a witness is not credible. In Todd's case we all came away feeling that he is not credible, and we said so afterwards.


The statement was released prior to the show being aired, when things were a little less tamed on the show. Standing responded via a Facebook message, and became defensive:

Well congrats to the "Finding Bigfoot' team and producers. After being on hundreds of newspaper, radio and tv interviews and shows, the finding bigfoot production is the worst I have EVER seen. Their production company is Called"Snake oil productions" for a reason. They have no intention of finding bigfoot and they couldn't possiblly be stupid enough to believe they could. They literally filmed me in a spot they choose where cows are grazing all around. And they couldn't even sneek up on the cows! That is what the morons are hearing "in the Candian wilds" that they cannot identify. They are right when they say it is not coyotes making that sound. Its cows they are hearing. That is what happens when you go bigfoot hunting by a ranch you idiots. I could right a list of 500 reasons these people will never film a deaf three legged moose in live action. Never mind Bigfoot. Here is a link to a good tv show that did a real piece on my bigfoot work. http://youtu.be/6RetQRg7J5Y


One of Standing's best footage was featured on Finding Bigfoot, and given the title on YouTube: "Bigfoot Video a Hoax?"

After Finding Bigfoot, things were quiet for a while  -- until Les Stroud came into the picture. Survivorman built up a reputation around his survival skills and is one of the most skilled experts on survival. In the Bigfoot community, everyone knows about Les Stroud's Bigfoot encounter, and it's one of the most bone chilling stories you'll ever hear from a hardened woodsman. When word got out that Standing was filming an episode of Survivorman with Les Stroud, supporters called it a vindication of his research. Others could not wait for Les Stroud to debunk standing.

Earlier this year, Standing was at an all time high, and Survivorman: Bigfoot supposedly did very well, ratings-wise. It did so good in fact that more Survivorman: Bigfoot are now in the works. Standing took his new-found fame and started Bigfoot North. It started with a radio show, featuring all-stars like Dr. Jeff Meldrum and Dr. John Bindernagel. For a new show, it was a hit. It quickly fizzled out after a couple of episodes, but it was all that Standing needed to introduce an even bigger campaign.

The Bigfoot North Kickstarter campaign is the biggest Bigfoot campaign in the history of Bigfoot. Standing is currently asking for $900,000 Canadian dollars (776,400.87 US) in donations for the project. Bigfoot North is actually an unfinished documentary featuring "5 never before seen Sasquatch Videos." It's unclear why $900,000 is needed to finish a project that's already halfway done, but that's not stopping many from donating. It's now been a month, and it's been stuck at $1,235 for a while with only 26 days left to go. Unless there's a benefactor that comes to the rescue, the $900,000 goal is high doubtful.

Did Standing see the writing on the wall and decided to call it quits? Or is there something much deeper behind it all? Dr. Jeff Meldrum had recently came under fire for supporting Todd Standing, but we doubt that has anything to do with Standing's latest announcement to drop Bigfoot North. It certainly leaves one to wonder why the announcement was made? Perhaps this isn't really a big a deal as some like to believe. People in Bigfoot (especially those with the biggest claims) tend to have multiple lives, and Standing probably isn't going anywhere.