Is It Wrong To Charge For A Bigfoot Expedition? 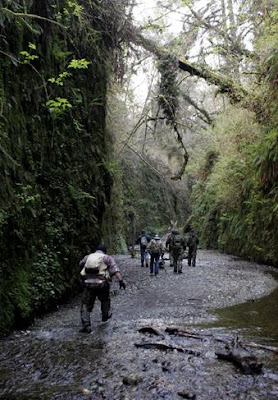 The BFRO has often been criticized for charging people to go on expeditions. Participants generally pay around $300 and "newbies" sometimes pay a one-time fee of up to $500. The exorbitant fees for participation have caused former members and some critics to wonder whether the organization is doing it all for money or are they doing it for a higher cause. To be fair, BFRO expedition organizer, Matt Pruit (who gets a 50% cut of the revenue) claims he really doesn't make a dime after all the expenses are paid.

I had to take several days off work for scouting locations (which I haven't added up yet), as well as taking six days off work for the expedition itself. That six-day stretch alone is a (roughly) $456 portion of my income that I had to forfeit in order to be present at the location during the expedition. When you have monthly bills (rent, car payments, auto insurance, cell phone, etc.) each dollar that you purposely forfeit counts.

So, if any of my readers are interested, I will add up my receipts and phone bill percentages, and internet bill percentages, and days missed at work (which also caused me to forfeit a quarterly bonus) to reconcile against that $1825.00 that I received for the expedition. I think you'll quickly see that I didn't profit a single dime on this expedition.

I don't organize expeditions to make money. I organize them in order to explore new areas, to challenge myself, and to introduce interested parties to the sasquatch phenomenon. In the process, I end up fostering many relationships between new researchers and BFRO members, witnesses, and cultivating new friendships.


Dr. Matthew A Johnson, someone who's not too fond of BFRO President Matt Moneymaker, wrote the following piece saying that one should never pay to go out on a Bigfoot expedition when there are plenty of people willing to take you out under their wing for FREE.

Johnson sees no need to spend money on gadgets. He claims expensive equipment such as night-vision goggles and game cameras used to seek out Bigfoot has never worked for him.

PAYING MONEY TO GO ON A BIGFOOT EXPEDITION??? ARE YOU KIDDING ME!!!

NEVER, NEVER, NEVER pay to go out on a Bigfoot expedition when there are plenty of people willing to take you out under their wing for FREE.

Now, as far as what equipment would I invest in if I had $500 to spend cuz I'm NOT going to blow $500 on paying the BFRO or someone else to take me out on a Bigfoot expedition? Hmmmmmm???

Well, let me share something with you that will save you some more money. Don't spend any money on any kind of equipment other than a pup tent, sleeping bag, pillow, foam pad for sleeping on (comfort is always a plus), and food for you as well as food for the Squatches.

I've NOT been out in the field as long as some but I have been out in the field long enough to learn some very important things. Therefore, I no longer bash my head needlessly against the proverbial brick wall. What do I mean? Well, I went out for 11 years with all the equipment (i.e., Deer cams, video cams, remote video cams viewing bait piles live at night with infrared cams, seismic sensors, motion sensors, parabolic dishes, night vision goggles, etc.). Guess what? We got NOTHING!!!! Absolutely NOTHING!!! What a waste of time, money, and effort. Oh, don't get me wrong, the Squatches were hanging around as evidenced by multiple foot casts, hand cast, two visuals, and the typical Squatch audibles and tree knocks. HOWEVER, we could NEVER get them on camera or video camera. Ugh!!!!!

Then just over a year ago, I decided to give in to the "Looneys" and try it their way. I decided to simply go out into the forest where I knew they were dwelling, set up camp while talking to them and singing to them, walk around the area while talking and singing without a camera or gun, place some food out there for them about 100 to 200 feet away from camp, have Cynthia play the flute at night, and sit there in the pitch dark of night and wait for them to come to us. Guess what? I've had more interactions with them over the past year, including visuals and physical contact, then I had in the first 11 years combined together. It's been absolutely AMAZING!!! The Habituation approach works!!! HOWEVER, it involves giving up wanting to capture them on film and focuses instead on simply interacting with them over time through building up their trust.

Now, so I'm NOT called a liar, I did invest in one piece of equipment which is PASSIVE by design and it's been working really well. I invested in a Parabolic Microphone Dish. We leave it on all night and it records for 9.5 hours nonstop. In a nutshell, we've recorded some pretty awesome stuff with it, including tree knocks, whoops, primate jibber jabber, a baby Squatch crying, a mamma Squatch comforting it's baby all night long, a daddy Squatch singing to it's baby in a beautiful bass voice ending in a virbrato, and a spoken language. It's amazing what the human ear misses all night long. The Squatches have no idea that we are using this PASSIVE technology and that's why it's successful. It's not utilizing "IN YOUR FACE" technology like Deer cams and Video cams do. So if you want to invest in some equipment, purchase a Parabolic Microphone Dish with a Sony Digital Recorder. That's money well spent.


To be fair, BFRO expedition organizers do not