Destination Truth: Some Vietnam Bigfoot Stories, The Creature They''ll Be Looking For Tonight On TV 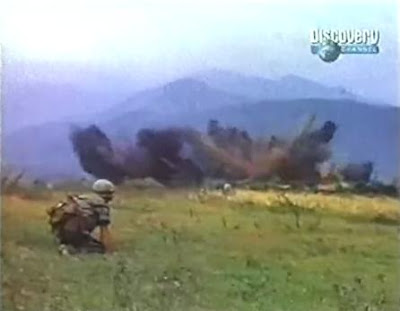 The premiere of season 5of Syfy's "Destination Truth" that's airing tonight at 8/7c will feature the Bigfoot of Vietnam. While we're getting ready for two whole hours of fun with Josh Gates and friends, here are some great Vietnam Rock Ape stories. One is by Cliff Barackman and the other is by Bigfoot Evidence contributor Vicki W.

I spoke to my father today, and he told me about an interesting thing that happened to him. I gave him a bigfoot t-shirt as a gift a while back, and he wore it to the gym for his workout. A man approached him and struck up a conversation about the t-shirt, and confided in my father that the man had seen a bigfoot a couple decades ago. This sort of thing happens in my bigfooty life all the time, but it was a new one for my dad. The incredibly interesting thing about this man's encounter is that it occurred in Vietnam while he was fighting in the Vietnam War.

The story, as relayed through my dad, is more or less that the man's platoon was exchanging fire with the enemy in the jungles of Vietnam. At one point on the adjacent hill, a bigfoot-type animal walked through a clearing, went back the way it came, and then went straight up a steep embankment or cliff before disappearing into the thick jungle. The creature apparently showed no difficulty in scaling the steep incline, which impressed the man greatly.

This man told my father that he doesn't talk about it much because he doesn't want people to think that he's crazy. Unfortunately, this fear is far too common among witnesses. It makes me wonder about the information that is still out there, yet remains hidden due to the fear of ridicule.

I had read of Vietnam veterans seeing bigfoot-like creatures in the jungles of Southeast Asia before, but this is as close to the source as I have ever come to one of these witnesses. Sightings from Vietnam are significant considering gigantopithecus fossils have been found there.


Below is an article by Bigfoot Evidence contributor Vicki W.: