Soldier Observes Bigfoot In The UK 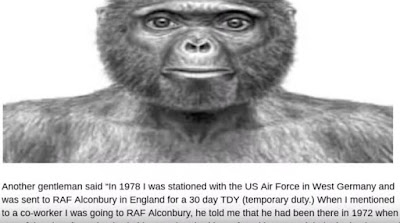 .A mechanic who was: “carrying out some routine work to an F-5 Aircraft, parked on the runway, a job that should have been completed in an hour. When he failed to make a telephone call, requesting a lift back from the Hangar, a search went out to find him. They found him sitting in the aircraft, as white as a sheet, with the canopy closed. Although I asked him, many times, what it was that he had seen, he declined, saying that it had frightened him so much that he refused to go anywhere near that location again. We discovered, from another source, that the man had seen a terrifying hairy humanoid, which had walked past the aircraft.”“Dennis Prisbrey, who was stationed here between 1973/5, told of his colleagues who saw a “creature” near the north side of the airfield. One sighting of it scared a colleague so much that he jumped into the cockpit of an aircraft and refused to get out. The creature was also seen climbing over the security fence, and entering the North Woods. Wesley Uptergrove who also saw the humanoid creature and said he tried to pursue it in a truck. He described it as 5ft 9″ tall, with human-like eyes, a flat nose, and large ears.