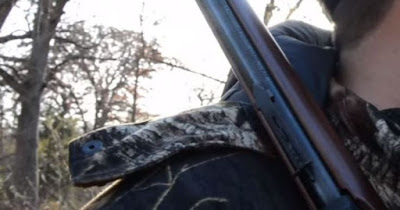 Not only are bigfoot big, but they are incredibly strong as well. Check out this encounter a hunter had where one threw a huge rock at him.

At this time I froze and began to scan the ridge line first with my eyes and then with my rifle scope, and I began to think that one of the guys I was hunting with was playing a prank on me. So I continued to climb the hill until a large piece of rock (it looked like a piece of ruined tombstone from the abandoned cemetery on the hill top but I am not sure) landed just at my feet and rolled down the hill with some force and momentum behind it. At almost that same moment I caught just the faintest glimmer of movement and from that was able to make out the shape of what looked like a huge man.

I am 6' 2" and 260 lbs but this thing was at least 9-10' tall and three or four times as broad as I am. I slowly brought my rifle and scope up to get a better look at it. Most of it was covered by brush and under growth but its head down to its upper chest were clearly visible. It had a shaggy coat (the breeze did a fair job of breaking up its silhouette) that was dark colored even with the aid of my scope all I could tell was that the beast was covered in fur and that it was of dark coloration. Its eyes seemed impossibly small for the size of its oblong head. I watched it with my scope for perhaps a minute or it could have been ten, I honestly could not tell you as I was not sure whether to be fascinated or terrified (from its size and mass I was not sure the 30-06 I had in my hands would be sufficient if I needed to be terrified).